News Correspondent, abptakmaa, Kolkata, 27th Dec 2020 : A surgery was performed to place an artificial graft tube replacing a portal vein damaged by a pancreatic cancer, a first for eastern India, at Apollo Hospitals, Kolkata after suffering for half a year and multiple failures of stenting in the affected area.

Pancreas, an organ located in the upper part of the abdominal cavity is most well known for producing Insulin (a hormone which regulates the blood sugar levels of the body) and digestive juices. It is tucked away deep inside the abdomen, almost hiding behind the stomach, duodenum, colon and spleen. God perhaps put the pancreas in the back of the abdomen because he did not want surgeons messing with it. But, at the same time, pancreatic cancers are often silent till very advanced stages and spread beyond the pancreas quite early making them incurable more often than not.

One of the first structures these tumours invade is the Portal Vein, which takes blood and nutrients to the liver and is normally encircled 270 degrees by the pancreas. This  very disease pancreatic cancer took away lives of many famous personalities like Steve Jobs, Patrick Swayze (Dirty Dancing, Ghost), Alan Rickman (Severus Snape in the Harry Potter series) and Irrfan Khan.

Similar was the scare for 51-year-old Mahboob Rahman from Murshidabad, who was diagnosed with advanced pancreatic adenocarcinoma. From October, 2019, he was suffering from jaundice for which he went underwent stenting to relieve the jaundice.  In the hope of getting cured he was taken to Hyderabad twice for stenting but each time would develop a block. He then underwent two more stenting surgeries in some hospital in Midnapore, West Bengal. Post this he was brought to Apollo Gleneagles Hospitals Kolkata in the month of October 2020, where clinical examination revealed pancreatic head mass for which stenting is not the ultimate treatment.

In such cases the jaundice can be reduced with stenting, but for full cure removal of the tumour is necessary.

Rahman, underwent a Whipple’s operation to remove the head of the pancreas with a part of the stomach, the bile duct and the duodenum; in addition his surgeons removed a segment of his portal vein and replaced it with an artificial graft tube made of PTFE (polytetrafluoroethylene).

In standard Whipples operation, pancreas, duodenum, bile duct and the small ball and lymph nodes around this area are removed. But in Mr Rahman’s case the portal vein also had to be removed, which in earlier days wasn’t possible most of the time. On this note, Dr. Ramdip Ray, senior consultant liver transplant surgeon at the Institute of Gastro Sciences and Liver Transplant, Apollo Hospitals, Kolkata, said: “The challenge is if you resect a part of the vein, then how you join/reconstruct the vein and the reconstruction depends on how much length you are removing of the portal vein. If the length is very small you can just stitch that part and close it. For bigger parts you need to do end to end anastomosis (anastomosis is a surgical connection between two structures) – you remove a part of it and you join the upper and the lower end by mobilizing it. And sometimes if the length is too big, say 5 or 6 centimeters you cannot approximate the two ends together, so you have to put a patch in between the upper and the lower end. This patch can be a vein from the body itself if possible, or you can use an artificial graft to replace that vein. In this case, the natural vein was not available at that point of time. And so we had put an artificial graft (PTFE graft) replacing the portal vein.”

Due to the complexity of the disease, earlier it would have been regarded incurable but now with complex major surgery often combined with chemotherapy pancreatic cancers are totally curable. When surgeons with expertise in pancreatic cancer surgery like Dr Sumit Gulati & Dr Supriyo Ghatak join hands with liver transplant surgeons like Dr Ramdip Ray, pancreatic cancers can be taken out along with a part of the portal vein without damaging the liver which is a hope of cure now for patients with advanced cancer. Pancreatic cancer with portal vein invasion can also now be cured.

Mr Mahboob was discharged 6 days after his operation and is recuperating well at home over the last 4 weeks.

Prof Mahesh Goenka, Director of the Institute of Gastrosciences at Apollo said, “COVID has made travel outside the state difficult for patients. Throughout these last 6 months patients with very complex & advanced gastrointestinal diseases have received the most state of art treatment at centres like ours. I believe this is a clear assurance to the people of Bengal that Kolkata is right at the top of available expertise and facilities in medical care in India. Mr Rahman’s operation is testament to just that – case reports of similar operation has not yet been published from anywhere in West Bengal earlier. ” Dr Goenka reiterates “My passion is to ensure that the latest technology & expertise, available anywhere in the world, is available in Kolkata itself – at least in gastrosciences & in liver transplant.” Publicity : Adfactors. 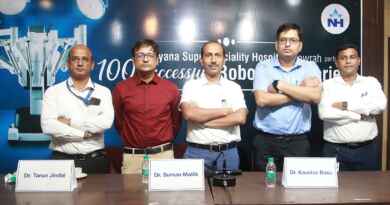