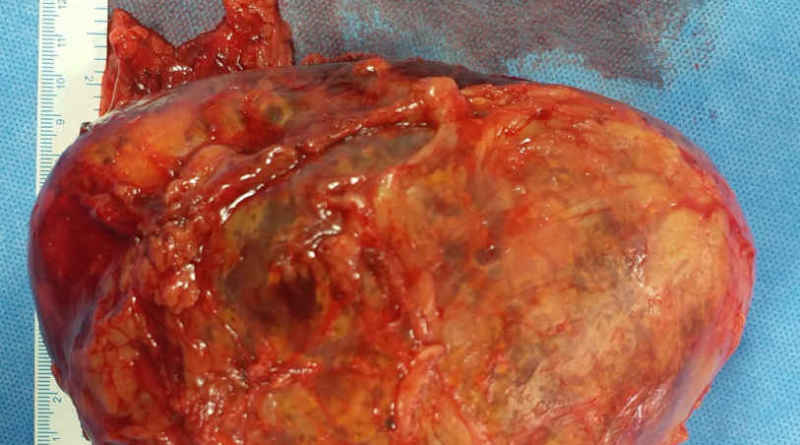 News Correspondent, abptakmaa, Kolkata, 25th Nov 2019 : A team of doctors, under the leadership of Dr. R.K. Gopalakrishna – Director of the Department of Urology and Renal Transplantation at Fortis Hospital Anandapur, removed a 17-cm long adrenal tumor, perhaps the largest-ever removed by laparoscopic procedure in Eastern India.

A 37-year lady presented to Fortis Hospital Anandapur with heaviness in right side of tummy for over 4 months. On investigation, the USG and CT scan reports revealed a rather large 12 cm right-sided adrenal tumor causing the heavy feeling. Her blood parameters, however, were all normal.

Explaining the reason why the surgeons decided on a laparoscopic procedure, Dr. Gopalakrishna said, “Generally, Adrenal Tumors, more than 11 cm, are considered technically difficult to be removed by laparoscopy. However, since the patient expressed a strong desire for laparoscopic procedure, and at the same time, the advantages of laparoscopy like excellent visibility during surgery and minimum loss of blood cannot be argued, we decided to go for a laparoscopic adrenalectomy.”

The procedure, which lasted for little under an hour with a blood loss of just 10 ml, the surgery was successfully completed. However, to the surgical team’s surprise, the tumor, on measurement was 17 cm x 11 cm, much larger than the normal limits of laparoscopic surgery and perhaps the largest-ever removed by laparoscopy in Eastern India.

Like any other patient undergoing laparoscopic surgery, the patient recovered satisfactorily. To add to her advantage, there was minimal discomfort and postoperative pain that the patient experienced and she was discharged in 4 days.

As per experts, laparoscopic adrenalectomy can be considered the standard treatment for all benign adrenal tumors up to 12cm to 14cm in size. However, in this case, the surgeons realized the actual size of the tumor only after removing it. Publicity : Carpediem.

Someone in the world develops dementia every 3 seconds; understand it to keep it at bay?